I have too many striped tees. This one by Maison Labiche is a favorite (tied with Petit Bateau x Kitsune collab). It’s a heavier material (not for summer), but it has a flattering fit and is soft. The sleeves are also not too long on my arms which typically align with petite sizing charts. I think it runs slightly big, yet tailored and neat. They come with an embroidered message on the chest, sometimes cheeky. You can also make your own (if you order from Paris or go to their Paris store). In comparison, Petit Bateau’s classic marinieres cut is boxier, the length/sleeves too long, and made of a stiffer material. And I never was into the classic Saint James tees either for similar reasons. This Maison Labiche top is of better quality than the striped tees that you’d find at J.Crew, Gap, etc. made of thinner material.

Currently Anthropologie has some styles on sale (long sleeve, short sleeve). Also find it at ASOS, Farfetch, Shopbop, East Dane (for him). 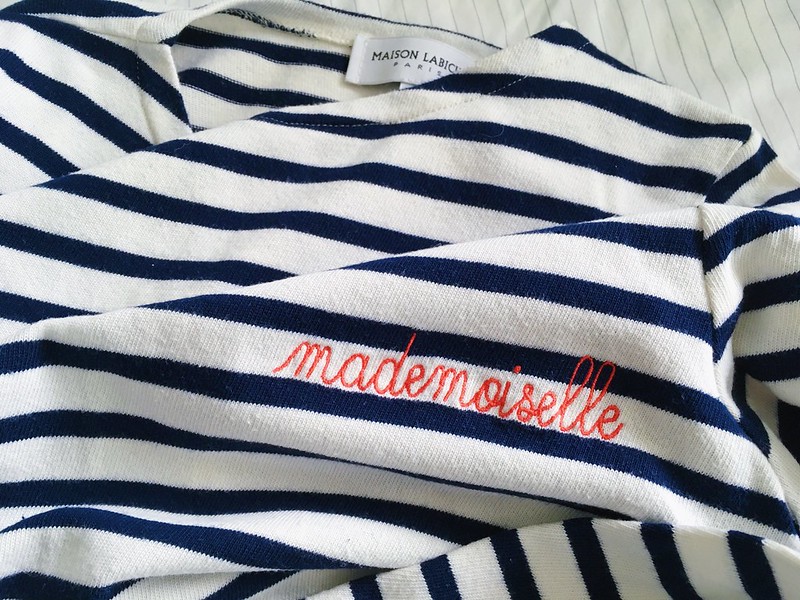 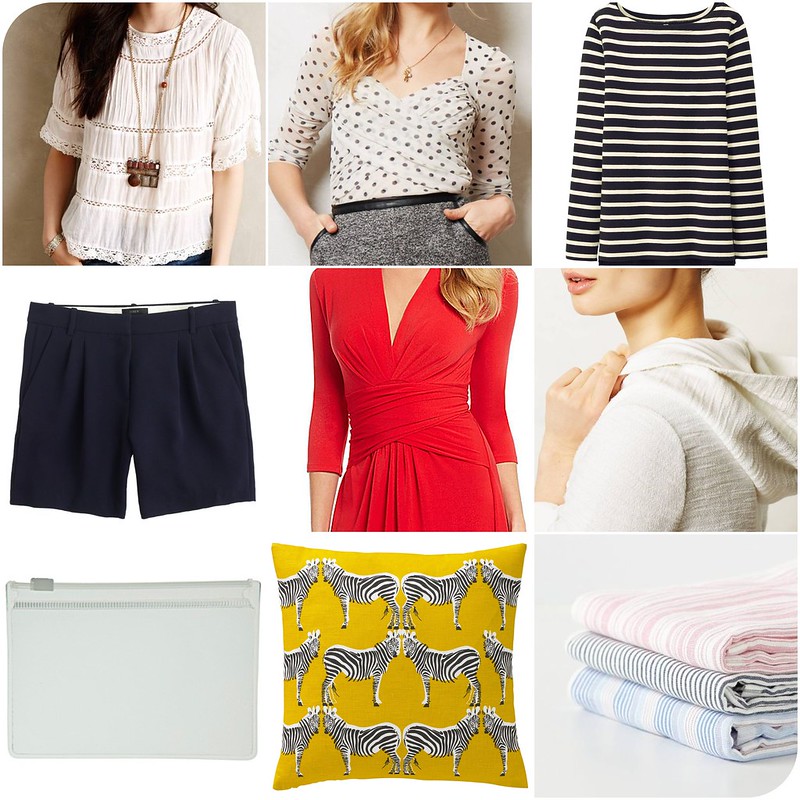 (1) There was a frenzy a while back and this Love Sam lace blouse sold out. But, then Shopbop restocked and Anthropologie got it too. It’s a copy of Etoile Isabel Marant’s Garbo blouse from last summer. I don’t have the appetite for Etoile Isabel Marant prices, so this will suffice. It is on the shorter side and runs big. It’s super breezy for hot summer days. It comes in black as well on Shopbop, but it’s too dark for the summer!

(2) I’m not keeping this mesh dottie top by Sweet Pea from Anthropologie, but some people might like the style. It’s a bit too vintage for me.

(3) My favorite proper striped boatneck mariniere is from Uniqlo (second would be Petit Bateau!). Warning, it runs big and is a heavier cotton so it’s not for hot weather. I have two from a few years ago and they both have held up very well. Sidenote: If you get your hands on the Airism slip, it’s fabulous for hot weather. It’s hard to find though – sold out super fast in the US and I didn’t even see it in HK/Singapore.
END_OF_DOCUMENT_TOKEN_TO_BE_REPLACED

Lord & Taylor has great sales. It’s too bad their site is so hard to navigate and checkout, so if do not have patience, it’s best to stay away. Consider yourself warned.

I love striped shirts. I especially like these L&T tops because they are 100% cotton (typically anything with other content gets dingy after a few washes and I appreciate durability), have 3/4 sleeves (great for my petite length arms), and they are mid-weight (perfect for layering and doesn’t show each lump and bump). I tried both XS and S and think I’m going to go with S, especially if they shrink a little. If you have a ShopRunner account (which was heavily pushed by Amex last holiday season), link your account for free 2 day shipping and returns.

They are much more affordable than the Petit Bateau marinieres (which does go on sale), but the PB tops have a much heavier weight (no summer or spring wear), cut much slimmer, and have long sleeves.

Many bloggers are obsessed with the old French label, Saint James. They are famous for their Breton tee (as they are Normandy-based and all). Most styles are unisex. I think it’s better to leave the unisex style to the men, unless you’re going for Gwyneth’s look here. I am not in the rail thin camp to go baggy.

While you can order from their US website, Saint James is more accessible via J.Crew or Madewell, especially when either is running a promotion or having a sale.

END_OF_DOCUMENT_TOKEN_TO_BE_REPLACED

I go through phases of frequenting a store like crazy (most of the time, it’s just window shopping, unless it’s a crazy sale) and then don’t go near it for a while. I used to go to Soho just for Uniqlo (why else would you battle the awful throngs of tourists?) and when I had an unlimited month to Bar Method down the street… it was quite bad. I haven’t been there since late September when they opened pop-ups in Flatiron and the new flagship in Midtown. Since then, they’ve opened another store near Herald Square. I dropped in as I was passing by the area. It was prime rush hour and the store was dead. It is such a refreshing surprise from the Soho store, which used to be so congested (and mobbed with Taiwanese fobs).

I tried to do a quick browse through but it turned out to be more like a fifteen minute stop since there are so many areas and stairs. I looked for the ultra lightweight long down jacket… yep, still sold out. Even though it looks like there is tons of any one item, it eventually sells out as my procrastinating friends who wanted this jacket quickly learned.

After looking at the +J on sale (which was the first time I looked at this last collection) and being totally uninspired, I turned a corner and what did I see? Striped tees! There are plenty of colors and they are wallet friendly at $19.90. They run big, so my tiny Asian friends… too bad! One thing the American Uniqlos are missing is kids’ clothing.